From Nick Page:
Jane was our guest in 1996, one our more memorable concerts.  Nick had first seen her performing with Pete Seeger in Chicago in 1983 and later had a chance to work with her at a folk festival in Wisconsin.  She arranged a Gospel style arrangement of This Land Is Your Land for the Mystic Chorale.

JANE SAPP is a nationally admired cultural worker, musician, educator, and activist whose approach to social transformation is rooted in African American musical traditions. She actively engages people in creative cultural processes, writing songs together, telling stories, shaping festivals, and designing museums of local culture. She performed frequently with Pete Seeger and collaborated with him and Si Kahn on the album Carry It On. She especially enjoys working with young people. 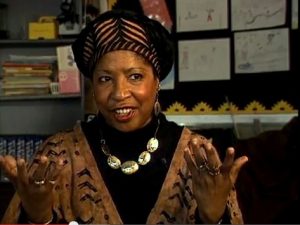